In the Netherlands, Aldith Hunkar is known most notably as a former news anchor for Dutch national newscasters NOS News and NOS Children’s News.

Aldith leads an expat life as a child. Her father’s career for the Dutch government and/or the United Nations takes the Hunkar family from Suriname, via Malaysia and Brazil to Tunisia. In these countries, Aldith attends different educational systems and learns to express herself not only in Dutch, but in English, French, Portuguese, Spanish and Italian as well.

She decides at a tender age that her heart lies in journalism. During her time in college (different majors with varying results), she writes recreationally and makes radio programmes for a local broadcaster in Belgium. 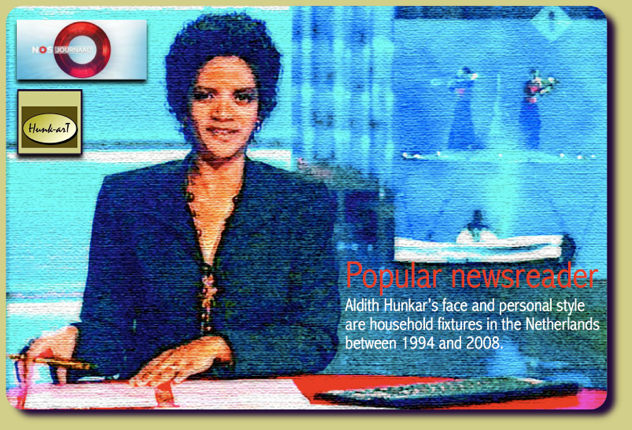 At the end of the 1980’s, Aldith’s talents as a radio presenter are officially recognized by the first commercial radio station in the Netherlands, Radio 10. The national broadcasters follow suit and Aldith makes radio programmes that stand out for several of them, most notably her alternative Top 40 and her talkradio show for broadcaster VPRO, during which she establishes herself as a conversation partner and a fresh and sharp interrogator.

A long drive down Media Road follows. An extensive but incomplete overview of Aldith’s media work was made by the Dutch Institute of Sound and Vision and can be viewed here.

In 1994, Aldith Hunkar is invited to anchor NOS Jeugdjournaal, the Dutch news programme for children, broadcast by national newscaster NOS. During the six years that follow, the daily programme receives many awards and Aldith herself is voted Female Television Presenter of the Year 1998 by the public.

In 2000, she switches to the regular News programme at NOS, where she becomes the first camera-journalist or camjo in the Netherlands. As a camjo, Aldith is not only director and interviewer, but camerawoman and sound engineer too, as well as editor/cutter of her own digital material. Her most memorable reports for NOS are filmed in Pakistan, Mozambique, Morocco and her country of birth, Suriname. They form the basis of her current work in global freestyle multi-media journalism, a phrase she coined years later.

During the NOS years, Aldith is also asked to present a host of high-profile TV programmes in the Netherlands, such as a 24-hour live marathon at the turn of the century and a 9-hour show to celebrate 50 years of NOS News. She also reports live from location during the annual events for Queen’s Day and during the introduction tour of provinces by the (then) Crown Prince of the Netherlands and his new fiancée.

Aldith Hunkar then further explores her work as a television reporter and presenter when she works for national broadcaster NPS between 2002 and 2004 and focuses on longer productions with a social and/or cultural character. She hosts the 2003 European Dancer of the Year competition, broadcast live all over Europe, and is presenter and reporter of a weekly programme on social change. Her love for and knowledge of music manifest themselves during the annual North Sea Jazz Festival in the Netherlands and the weekly episodes of NPS Jazz, a popular TV programme that ensues from it.

During this two-year period, Aldith also establishes her reputation outside the media. Moderating on any stage, she conveys competence and a relaxed attitude, resulting in recurring requests from different ministries, large events and cultural or educational organizations. Her multilingualism makes her a favourite with international projects.

In 2004 she returns to the National News at NOS, this time as a news anchor. The audience and her peers appreciate her personality and mostly her steadfast sense of control during Breaking News bulletins.